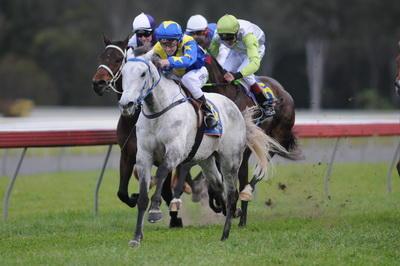 Super midget, seven-year-old Hawkesbury gelding Spence (13-2), went within a whisker of a track record in a devastating show of power to score in the $60,000 Taree City Centre 2010 Taree Quality Cup (2000m) at Taree-Wingham Race Club's big TAB meeting before an excellent crowd at Bushland Drive Racecourse.

The diminutive grey galloper awe-inspired not only the crowd by its small frame but also 25-year-old Sydney winning jockey Peter Wells who along with Spence's trainer Lisa Cohen were having their first visit to the Taree track.

"I have never ridden a smaller horse ? he is all heart," Wells said.

"He has that will to win that over-powers strength ... he is game."

"He should be at pony club, he is a kid's pony," added an excited Cohen who was trackside with her husband, Joel and two of her four children, Hayley and Katherine.

Spence outgunned the big guns with better Sydney form in a dashing ride by Wells to come from the tail of the field, weave a passage through the middle and score by a length from Moonbi six-year-old gelding Blinkin Easy (20-1), trained by Ruth Cooper, with another length to the heavily-backed 13-8 favourite Gazza Guru, trained at Wyong by Stephen Farley, which got too far back with 600m to go.

Local hope Long Journey Home, trained at Port Macquarie by Neil Godbolt for its Kempsey owners, led into the straight but failed to run the journey out strongly to finish mid-field.

But all the honours went to Spence, nurtured on the lush hills at Kurrajong, in a well-planned raid on the cup by Cohen.

She came up on the day of the race so that Spence wouldn't get agitated, knowing all his attributes since day one as she bred the gelding to spearhead her foray into training after a stint as an apprentice jockey with Sydney trainer Chris Waller.

"He has been so much fun to train."

But the midget racehorse has certainly earned his stripes, having won over 2400m in Sydney in a career of 55 starts for six wins and prizemoney of about $122,000.