Below is a list of our favorite achievements since Sapphire Lodge's establishment. With several pieces of silverware resting on the mantelpiece, Sapphire Lodge is proud of its achievements as a bouqitue racing & breeding operation.

by RESET from WATCH ME DANZ 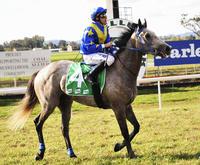 Already a winner as a three-year old, this young gelding has shown plenty of ability to be a prominent metropolitan stayer.

Half brother to Spence and Prestidigitate, this grey gelding out of ‘Watch Me Danz’ is another successful racehorse that was bred at Sapphire Lodge.

by MAGIC ALBERT from WATCH ME DANZ

Full brother to Prestidigitate, the third foal out of ‘Watch Me Danz’ is maintaining her perfect breeding record, producing winner after winner.

This strong Magic Albert has a successful racing career, yet to come!

by MOSSMAN from CATALYST (USA)

A honest sprinting performer, Mosscat is a winner of three races and has recorded a further fifteen top five finishes throughout his illustrious career.

Notching over $43,000 in stakes, this consistent campaigner is a Bathurst racetrack specialist winning two races from as many starts at the racetrack.

by MAGIC ALBERT from WATCH ME DANZ

A winner of six races and just shy of $100,000 in prizemoney, Prestidigitate is a versatile performer who won races ranging from 1100-2300 metres.

Often a front-running type, the son of Magic Albert has an exciting racing pattern to watch and provided his owners with many thrills.

by LARANTO from WATCH ME DANZ

Setting a class record in June, 2010 over 2400m at Royal Randwick Racecourse with Corey Brown on board, paved the way for this 400kg ‘Battler’ to triumph over his competitors. In 2010, he took the Taree Cup, coming from behind in a spectacular finish and went on to claim the Sky Gold Bathurst Cup, leading all the way, in 2011. Never ceasing to thrill his owners, in addition, he consecutively triumphed at Broadmeadow Racecourse taking home the prestigious, Bill Turner Memorial Award.